Starting out with intention

Posted on December 8, 2015 by Buddhist Sangha

Sometimes the universe sends its messages ‘loud and clear’, and often, they come from 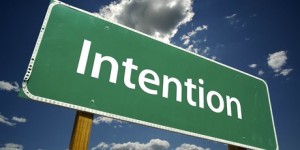 the most unlikely sources. I think I was blessed with just such messages a few weeks ago. With Thanksgiving behind me, I awoke on the following Monday worrying about two responsibilities I had to fulfill within the week: getting my weather-damaged Christmas display repaired and mounted and writing this column. I faced them both with dread. It wasn’t that they were so inherently difficult in themselves, but the holiday season often puts me into a glassy-eyed, nearly frantic state, making any job that comes up during that period seem all the more insurmountable. In addition, as a perfectionist, responsibilities usually weigh heavily on me, and I could feel tension starting to settle into my chest.

As luck would have it, my daughter called early in the morning to tell me about her experience with her bird feeder. Apparently it had been noticed by many colorful birds, and then by hordes of sparrows. She was distraught because the numerous sparrows were monopolizing the feeder and emptying it every day, leaving nothing for the other varieties of birds. She wanted to discourage the sparrows but still keep the feeder full for other birds, so she continued to fill it but prayed for a solution. A few days later, she spotted a Sharp-Skinned Hawk, uncommon in her area, nearby. This hawk is known to prey on sparrows, and my daughter was relieved that her problem had been solved without her having to take any offensive action against them.

Later in the day, I went to my Tai Chi class. Although Tai Chi has martial arts applications, my class stresses the health and flexibility benefits of the art, not the aggressive applications. However, Clyde, our teacher, often mentions the protective uses of some of the movements. A main principle of Tai Chi is non-aggression and victory by using one’s opponent’s aggression as a force against him. Clyde used the phrase, “soft overcomes hard”, which seemed to me to be the same message I got from my daughter’s story.

Both of these incidents put me in mind of the value and wisdom of spiritual teachings about non aggression, turning the other cheek, and having right intention. If our intention is to have love and compassion for all beings rather than to have our immediate needs satisfied, the universe will sometimes supply the vehicle to make things work out as we wish them to. Buddhism lists Right Intention as one of the steps on its Noble Eightfold Path, the path leading us out of human suffering; other spiritual traditions teach similar principles. If our intention is to do no harm, we need to examine our attitudes and motivations before we act, especially if our action is of a retaliatory nature, and realize that it’s in our own highest interest to be less ego-invested. Learning to ask ourselves if what we want serves the highest good for all is a worthwhile habit to acquire. Buddhism asks us to develop an unselfish view of the world because we are all interconnected, and our fates are ultimately intertwined, a fact easily confirmed by reading the headlines in any newspaper.

The universe was looking out for me on that Monday. My sweet and artistically talented daughter offered to help me to repair my Christmas display, relieving my mind of one major worry. As a bonus, her bird feeder story suggested a theme for this column.

Buddhist Sangha of Bucks County
View all posts by Buddhist Sangha →
This entry was posted in Home and tagged edna, eightfold path, Home. Bookmark the permalink.