Sila and Moving Beyond Guilt 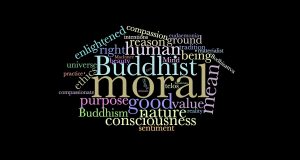 Last night Janet Weathers led a discussion about Sila – ethical conduct, one of the six paramitas (perfections or perfect realizations). It was a rich overview in which she included perspectives from both Thich Nhat Hanah and Joseph Goldstein, two prominent Buddhist leaders and well regarded authors, as well.

One of the things I particularly found comforting was the idea that current practice that includes our present commitment to sila “can ease the mind from excessive worry, regret or guilt about past acts”, (Goldstein, Mindfulness, p. 160). In a handout that Janet shared with those in attendance, it says that differentiating remorse from guilt is necessary as “guilt is an unwholesome factor of mind that simply reinforces the sense of self with negative self-judgment” whereas “remorse…acknowledges the action, understands its unwholesomeness, makes amends when possible, and then moves on. This is an act of self-forgiveness, which is honest in its assessment and wise in its understanding of impermanence and selflessness” (Goldstein, Mindfulness, p. 161).

This is the first time that I can remember hearing a juxtaposition between the concept of guilt and that of remorse. Many of us have probably heard the idea that guilt is simply wasted energy but that never seemed to answer how to account for the feelings associated with it. That is where remorse seems to fit the bill – the opportunity to bring an awareness to a feeling without identifying with it in an unhealthy way. Add to this the ability to always come back to a renewed dedication toward better conduct, and one has the ability to truly move on.

We are human, after all, and even the most “stable” of us cannot go through this life without causing harm, whether directly or indirectly. It is this part of the journey and how we reflect and learn from it, much like any other that allows our loving kindness and compassion to grow.