We are pleased to announce that Dr. Rebecca Li, who studies and teaches in the Chan tradition, visited us in Yardley on Monday, September 19th.

Chan started in China in the 6th century CE, and spread south to Vietnam, and to Korea, and reached Japan in the 13th century CE, where it became known as Zen.  Read her article in Lions Roar Magazine

Rebecca taught about the importance of practice and about the Chan tradition. She also lead us in a guided meditation in the Chan style, and answered our questions. 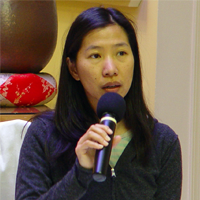 Rebecca began practicing in 1995, and attended her first seven-day intensive retreat with Chan Master Sheng Yen, founder of Dharma Drum Retreat Center (DDRC), in the following year. Since then she has attended numerous intensive Chan retreats. In 1999 after moving to New Jersey she began translating for Master Sheng Yen. In the same year, she began her training with the Master to become a Dharma and meditation instructor. Currently, she teaches meditation and Dharma classes and gives public lectures at the Chan Meditation Center (CMC) and leads 1- to 3-day retreats at CMC & DDRC. She has been training with Simon Child since 2008 to conduct retreat interviews and has been assisting in his intensive retreats since 2012. Along with her husband David Slaymaker, Rebecca leads Chan practice at Rutgers University and the New Jersey chapter of DDMBA and teaches on behalf of Dharma Drum in various community activities in the NJ-NY area. Rebecca is a board member of the Dharma Drum Retreat Center and professor of sociology at The College of New Jersey.

Buddhist Sangha of Bucks County
View all posts by Buddhist Sangha →
This entry was posted in Home and tagged Home, Rebecca Li, teacher. Bookmark the permalink.