About the Synergy Project ( Woody)

The Buddhist Sangha of Bucks County has been supporting The Synergy Project for a number of years. Our Outreach and Service Committee works with Woody to identify needs and provide resources he needs to continue the important work of helping homeless teens in our region. Below is an article reprinted from Bucks Coalition Against Trafficking newsletter (Summer 2017) which gives more info about this work.

Woody, a Synergy Project member since 2013, traverses Bucks County’s 624 square miles to reach homeless teenagers and young adults (typically 18-21 year olds, bringing food, basic hygiene products, food cards, and a listening ear. Although Bucks County is thought of as a prosperous county in Pennsylvania, homelessness among youth and adults is not uncommon.

“We average about 27 to 30 kids that we reach every month in Bucks County,” Woody said recently. “There are about 2.8 million homeless people under the age of 17 in the U.S., and we get our share here.” The circumstances by which local youth find themselves on the streets vary; some are runaways, some are fleeing abuse, and some are kicked out of their homes by family. In the case of 18-21-year-olds, often they are youth from the foster care system who “age out,” or become emancipated at 18 without a support network. The youth are often difficult to find because unlike adult homeless, who often congregate, youth don’t typically convene at “homeless camps.” They’re too often on the run and trying to hide.

“I provide direct services on the street to homeless kids,” he explained. “One hundred percent of my job is to form relationships with youth who are homeless, or couch surfing, or nomads-kids who might be in Bucks County only for a little while before they move on.” Woody says he and the two other Synergy Project staffers try to form relationships that give the youth the security of knowing that someone is here to listen to them and to help provide some materials support. Most important, though, Woody noted, is that the youth say his value to them is as a good listener.

“Homelessness doesn’t define who these kids are; it’s just the situation they find themselves in right now,” he said. “My job isn’t to find these kids and turn them in; I’m not a cop. I want to sit down with them, have a meal with them, talk to them instead of handing them food and watching them eat. Most of them tell me they just want someone to listen to them.”

Whatever you bring for either cause will be gratefully accepted. The Buddhist word for giving is Dana, which means to offer, share, or gladly give without expecting anything in return. The Committee essentially is here to provide one directed means for the Sangha to do this. 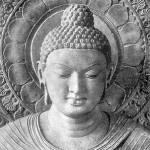